Council Back Bid By Queens Trust 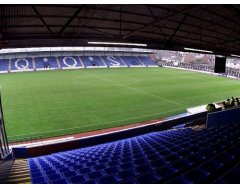 A meeting has been scheduled between Queen of the South fans, the club and the local authority to look at putting fan representation on the board.

Dumfries and Galloway Council has already agreed in principle to back the bid by the Queens Trust.

Efforts to get it discussed at the annual general meeting this year came too late to be added to the agenda.

However, talks will now be held in June to look at how the proposals might be taken forward.

The Queens Trust has just over 900 shares in the Scottish Championship club, with 7,500 needed to allow it to add an item to the AGM agenda.

It needs the support of the council - which holds more than 6,600 shares - to help secure its goal of discussing a director's role.

Failing that, the fans group has said it would hope to get a "non-voting representative" onto the board.

The club has said that its door is "always open" for an "open and honest dialogue" with supporters.

A report to the Dumfries common good sub committee said a meeting would be held in June between the club and the trust as well as committee members and a council officer.

It seeks the nomination of two councillors to attend the talks.

After the meeting a report will be brought back to the council to look at the way forward.