Coup For Queens As Dobbie Returns 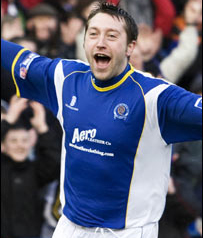 Queen of the South has announced the signing of former fans favourite Stephen Dobbie, six years after he left Palmerston for the English game.

The 33-year-old, who left Bolton Wanderers at the end of last season, rejoins the Scottish championship side to bolster their attacking options.

Dobbie signed for the Doonhamers back in 2007 scoring 50 goals in over 80 appearances and was with the Dumfries side when they reached the 2008 Scottish Cup Final.

The former Rangers player moved to the English game in 2009 and went on to help both Swansea City and Blackpool secure promotion to the Premier League via the play-offs.

Speaking following his move back to Dumfries, Dobbie was delighted to be back at the club, he said: “I had a really positive meeting with the manager this afternoon and I can’t wait to get started. It’s good to get back to something familiar and somewhere where I had a good relationship with the fans.

“I had a few things in the pipeline but as soon as I knew Queens were interested it was just a matter of getting it done. I know what the club is about and hopefully the fans will be happy I’ve returned. I’m here to try to finish something that didn’t happen the last time and get Queens up. I love scoring goals and playing football, I’ve not come here to be fifth or sixth in the Championship, I’m coming here to help try to get the club to the play-offs or higher.”

Football development manager, Jim Thomson added: “It’s fantastic for the club, I didn’t think we’d be able to get someone of his quality. I’m in regular contact with him so when he became available, we pulled out all the stops to secure him and we’re over the moon, it’s a big boost for the club. It shows everybody where we want to be – the top end of the championship.”

“We’re still in shock that we’ve been able to acquire his services, given last season he was playing in the English Championship, but credit to the Board for releasing the funds. He comes with a wealth of experience and hopefully he will pass that on, especially to the younger players. It’s not just his ability we’ll benefit from we are now also able to tap into that experience and we’re overjoyed.

“We still hope to bring another couple of quality players to the club.”

No fee has been disclosed and neither the length of contract.