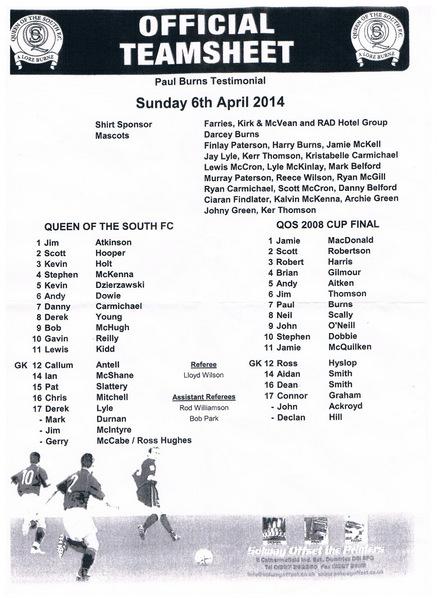 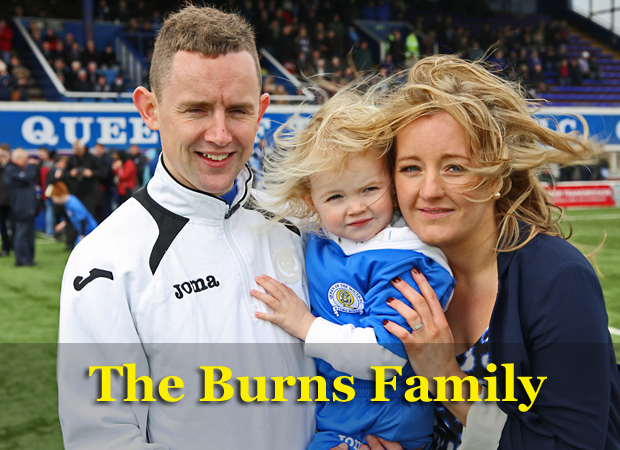 Around 850 fans attended Palmerston on Saturday to pay tribute to Paul Burns a quiet modest wee man from Cumnock, small in stature but wiry and with the heart of lion.

Paul has given tremendous service to the club and has achieved legendary status amongst the Queen's support. Who can forget his wonderful goal against Aberdeen in the Scottish Cup semi-Final earning him the infamous title amongst Dons fans as 'the baby-faced assassin'.

Thankfully the weather cleared and after Paul had been presented with various momentos the game kicked off with an abundance of Queen's stars past and present Invited.

Bob Harris Stephen Dobbie did take the field along with Jamie McDonald but the former two stars lasted only minutes and the latter 20 minutes as they came off due to club commitments.

Several old Queens stars were on view including the evergreen Jim Thomson,the balding Andy Aitken and the classy John O'Niell. Jammer McQuilken and old favourite Neil Scally were all included in a strong Cup Final side.

Stephen McKenna clubbed a tremendous shot into the top corner for the Queens side to start off the entertainment but Burns had the opportunity to eqialise after the referee awarded a soft penalty for the Cup Final side. 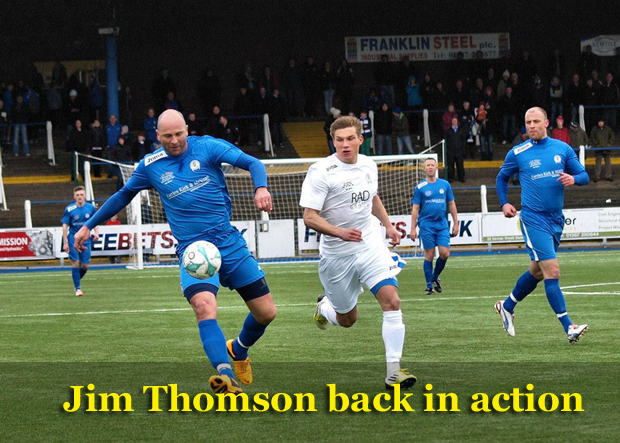 The man of the moment Burns made a right arse of the penalty amid howls of laughter from the Portland Drive terrace. The wee man did score moments later but at the wrong end as a McHugh shot was deflected off Cumnock man's foot into the net to give the Queens team a 2-0 lead.

The Cup Final team seemed to running out of puff but Burns converted a penalty after Atkinson had parried his firt effort.

Gavin Reilly made it 3-1 with good finish and the Cup Final team were glad have a rest as the referee blew for half-time.

During the interval several of the players took up the 84 yard Ryan McCann challenge but the drving rain and wind put paid to most efforts.

The game opened up after the interval with O'Neill showing Burns how to convert a penalty. Lyle and Kidd adding further goals for the Queen'steam then Smith pulled one back for the Cup Final team.

Neill Scally was slowly running out of gas for the Cup Final team and was relying heavily on step overs and shirt tugging to fool his marker.

He was eventually hooked but sneaked on before the end on the blind side of the linesman and the Cup Final team finished with 12 men.

Jim NcMIntyre was meanwhile getting some friendly stick from the fans who were howling for him to be hooked.

The classy John O'Neill rounded off the scoring to make it 7-5 to the Queens team and at the end the players did a lap of honour with Burnsey carrying his wee daughter.

It was a splendid afternoon and a fitting tribute to a player who has gained the respect of many. 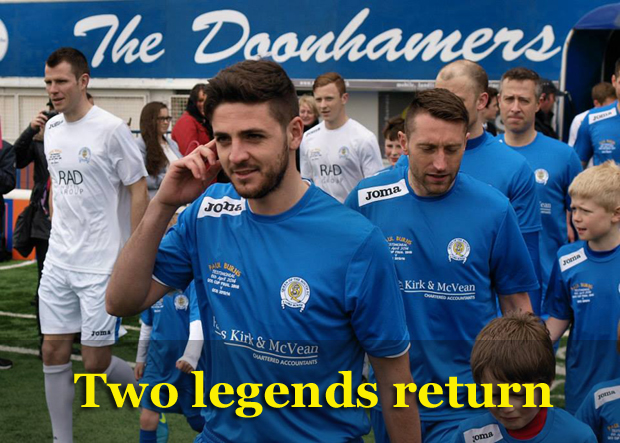