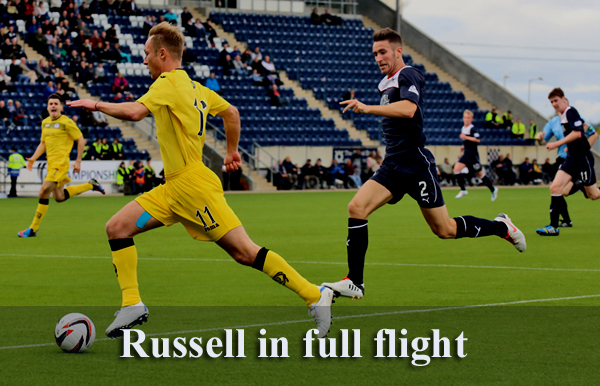 The SPFL Spotlight this week falls on Queen of the South striker Iain Russell.

The 31-year-old already has four goals to his credit in 2014/15 and will be hoping to help Jim McIntyre’s side upset Rangers on Saturday.

Russell, nicknamed Beanie, was on the books at Ibrox as a youngster and has also played for Motherwell, Dumbarton, Brechin City, Morton, Alloa Athletic, Stirling Albion and Livingston.

What’s the best goal you have ever scored?
I have not actually scored that many spectacular goals as nearly all of mine have come from a couple of yards out or from penalties! I think I have scored just the one goal from outside the box in my entire career of over 150 goals. That was for Livingston against Brechin City in a midweek game so that will have to be my best ever goal!

What’s the best game you have played in?
It was for Morton against Hibs in the League Cup second round in August 2008. There was a really big crowd - we won 4-3 in extra time and I scored two that night. We were two goals up and then Hibs forced extra time before going ahead. I scored a penalty to make it 3-3 and Ryan Harding popped up with the winner.

What is your favourite away ground?
I like playing at Cappielow against Morton but my other favourite is probably Tynecastle. It is always a great atmosphere there.

Who is the biggest moaner at the club?
Andy Dowie – he is getting worse as he is getting older! The boss has even picked up on it now!

Who is the worst dressed at the club?
Derek Lyle – he wears really expensive clothes but they are terrible. He buys all the labels but they are just not good clothes!

Who is the best dancer?
That has to be Michael Paton as he has all the moves.

What is your favourite pre-match meal?
Scrambled eggs on toast every time.

What is your favourite other sport?
I like golf and have a handicap of 12. That could be improved on but I am not giving anything away!

How much of the World Cup did you watch?
I watched a lot of it and was trying to get my son Alfie into football by watching games with him. I was in Spain when some of it was on and I watched it over there as well. Argentina’s Lionel Messi was the main man for me.

Who is your favourite singer?
John Legend